How to Care For Your Plants

So, you just put your new plants in the ground, but do you know how to care for them? We’re here to help! Here are a few tips when caring for your newly established trees, shrubs, and other plants.

They Are Very Thirsty!

Your plants need water! Ideally, you should water them for 15 minutes at a slow trickle from your hose. Or, if you are unable to reach your plant with a hose, you can use a 5-gallon bucket with a small hole drilled into the bottom of it. Just fill it with water, and place the hole of the bucket as close to the center of your plant or tree as you can (without smashing it, of course). How often should you do this, you ask? Here’s a good standard to follow:

They Need To Be Trimmed!

Right now, your plants look beautiful. You want to keep them that way! Just like your hair needs trimmed periodically to keep it healthy, so do your plants. They should be trimmed twice a year, in the Spring and Fall, and given a proper pruning at least once per year. The difference? Trimming maintains the plant’s shape and size, and a pruning allows for airflow and sunlight into the inner foliage of the plant or tree. In short, Pruning=Increased Sunlight=Fuller Foliage. Plus, without pruning, a plant can acquire molds and fungi. Oh No!

Look Out For Fungus And Parasites!

There are a few, very common types of fungi and parasites that you should be aware of. It’s best to notify us immediately if you notice any of these signs, so we can help you, or instruct you, with what to do.

LEAF SPOT: Black or brown spots found on leaves and branches, most commonly in the Magnolia species. This is prevented with pruning, as it is caused by moisture trapped within the shrub or tree. If caught early enough, leaf spot can be reversed with a copper-based fungicide (1).

BAGWORMS: Usually seen on Arborvitae and Red Cedar trees, but over 100 species of evergreen and deciduous trees can be affected by this parasite. They spread fast, and kill your trees fast! They are treated with insecticides (2). 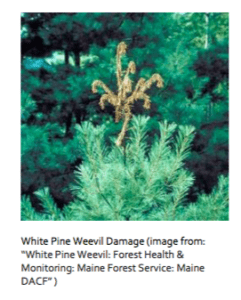 WHITE PINE WEEVIL: Extremely destructive to the Eastern White Pine. This parasite starts by killing the “leader” of tree first (this is the stick that stands straight up on an evergreen, where you would put the star when you decorate your Holiday Tree every year). It then proceeds to kill and brown the branches, working from the top to the bottom. Colorado Blue, Serbian Spruces, Austrian Pines, Norway, Scots, and occasionally Douglas-Fir can also be affected. The first sign is droplets of resin on the leader in March and April, which will result in the leader turning brown. If caught at this point, it can be treated with insecticides from March-April. However, if not caught early enough, the second line of defense is to cut the top of the tree off and burn it before mid-July (3).

How To Get Rid of Bagworms. (n.d.). Retrieved February 5, 2018, from https://www.solutionsstores.com/bagworms